Want to learn more about who we are?

Want to see the many services we provide?

Go to our FAQ page for answers... 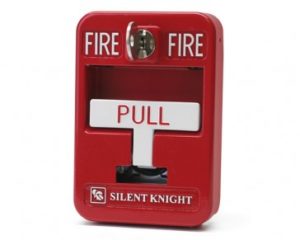 Enter any high occupancy building in the country and you may have noticed a red box with the word “Fire” or “Fire Alarm” written on its front cover. You may have seen them, but do you know what their main purpose is and more importantly, how to use them?

If you’re not familiar with manual pull stations, by reading this article you will gain a better understanding of how they operate and when they are to be used in fire emergency situations.

If you’re in the fire alarm business, you are very familiar with the manual pull station. They seemingly jump out at you when watching movies, don’t they?

You’ve probably seen McGyver or some other show where a spy or bank robber pulls a station to distract or evacuate a building. The clincher is when this is done on a Hollywood movie set, it activates the building’s fire sprinkler system… This is simply a big myth.

Sure it looks cool on T.V. or in the movies but it’s stretching reality to its limits.

Yes, the building’s fire alarm system “is” tied into the sprinkler system, but in most cases, it is for monitoring purposes only and has nothing to do with sprinkler “activation”. It actually works the other way around. In reality, the sprinkler system activates the electronic fire alarm system, not visa-versa. So, the next time you see this happen in an action film, write it off as “bad research” or ignorance on the part of the movie producer.

Exceptions To This Rule

There “are” manual pull stations specifically installed to activate kitchen hood systems, CO2, Halon, and dry systems in places that require a fire retardant agent, so there is a bit of truth to this myth. In most cases, you will find these systems located in kitchens, computer rooms, document storage facilities or other areas that require immediate fire protection, but won’t cause water damage.

According to most fire and building codes, including NFPA72 and the International Building Codes, manual pull stations shall be installed at or near all building exits. Without going into specific details, we will say that in the NFPA72, manual stations are to be installed within five feet from a single door exit and if the door is wider than specified for a single opening, two stations must be installed (this information can be found in NFPA72).

In high-rise buildings you will also find them near all stairway exit doors and even in elevator lobbies.

How To Operate A Manual Pull Station

Typically, there are two types of stations. One is called a single action, the other a double or dual action. On a dual action station, one is required to either lift a cover or push in a latch to enable the “pulling” action of the pull station.

In many jurisdictions the dual action pull station is required to prevent anyone from “accidentally” moving the pull station into an alarmed state. In other words, if a pull station is triggered on a dual-action, it is highly likely that the triggering was done intentionally.

When Is It Appropriate To Use A Manual Pull Station?

For all practical purposes, the pull station is used to manually activate a fire alarm if the fire has not yet reached the sensing range of automatic fire detection devices, such as smoke or heat detectors.

It is done by pulling a door or level down or away from the wall-base of the station. This pulling action then actuates a switch located within the manual pull station, which in turn triggers the building’s fire alarm system.

The reasoning behind locating pull stations near all building exits is so that the person activating the alarm is moving out and away from the building at the time they are activating the fire alarm system.

Please note that there are other rules concerning locations in long hallways. For more information or more intricate details, contact your local fire marshal’s office or purchase the one of the fire alarm code/handbooks.

Is There Ever A Bad Time To Activate A Manual Pull Station?

As long as there are signs of fire present, anytime is a good time. On the other hand, if one were to pull one of these stations just to get someone’s attention or to play a “joke”, then it’s not only ethically wrong to do so, but is illegal and considered a felony. It can lead to thousands of dollars in fines and even land someone in jail.

When it comes to perpetrators “purposefully” activating false fire alarms, the courts (and fire officials) look at this action as a form of aggression towards the safety and well-being of others lives and they don’t take this action lightly. There is a good chance that if one gets caught, he (or she) will get maximum penalties for committing this crime.

If you are thinking you won’t get caught, think again…

A couple of years ago, a middle school called us out to reset a pull station because they misplaced their alarm reset keys.

By the time we arrived, the campus police had already apprehended a girl who pulled the manual station because she was about to take a test and wanted extra time to study for the test.

Thinking that this ordeal would temporarily suspend classes and use up much of the time it would to take the test, she decided to disrupt the entire school by pulling the alarm. Little did she know there were hidden cameras at every exit recording her every move. Kids, if you are reading this article, this is a very serious matter and chances are, YOU WILL GET CAUGHT.

Sure, little practical jokes can be fun at times, but this is no laughing matter. Lives may be lost if a fire department is responding to a false alarm while others are in desperate need of help from their local fire department.

In Closing…
We hope you have learned what a manual pull station and its use is for and hope that you come back for more tips on commercial fire alarm systems. If you would like to stay up-to-date and informed, please feel free to fill out the form in the upper right hand corner of this page and an automatic email will be sent to you as soon as we place a new article on our website.

How long does an inspection typically take from start to finish? It really depends on the size of your building and access into all areas of your premises. When we […]

Sprinklers If your are looking for information concerning your fire sprinkler system, would like pricing on inspections and repairs, please go here. Learn More >> Fire Alarm Systems Have a […]

What services do we provide? We are all about life safety and life safety services. Although we are known best for our superior Sprinkler Inspections, we do a lot more! […]